The Lunarian Shuffle is a game randomizer that will take in a FF2US v1.1 ROM and turn it into a brand new strategic challenge!

The goals are not randomized - enemies, bosses, and dungeon layouts are the same as in the original.  Your task with each playthrough is to plan ahead regarding what equipment to hunt down and how many levels to earn for which characters in order to survive the upcoming challenges with the parties that will be present for each fight.

More detailed information is on the left panel of the program itself.

Get The Lunarian Shuffle here!
https://drive.google.com/drive/folders/0B9k5jnZ_x-ijRG5BTE1objljbzQ?resourcekey=0-0RFE3TC3A3VnxLH4vaqIdA&usp=sharing
If you have difficulty installing, refer to the Readme document.

Want to talk about The Lunarian Shuffle?  We have a Discord server here:
https://discord.gg/V2pUVGH


Making a good randomizer is a lot of work!  If you would like to thank me for this project, and especially if you would like to see me create similar projects in the future, please donate (and leave a message, if you like!) here:
https://twitch.streamlabs.com/iICrowIi

To follow me on my future projects and speed runs, visit my Twitch channel:
https://www.twitch.tv/iicrowii

A minor feature update is now live!  TLS version 1.141 provides a 'tooltip' feature in the Inventory menu and in weapon and armor shops.  Simply point to a piece of equipment and press Select to see a summary of what the item does.  I plan to eventually extend this feature to the Equipment menu and the Exchange screen, but that will have to come another time.

As always, get it from Google Drive: https://drive.google.com/drive/folders/0B9k5jnZ_x-ijRG5BTE1objljbzQ?resourcekey=0-0RFE3TC3A3VnxLH4vaqIdA&usp=sharing

In other news, I will be presenting The Lunarian Shuffle during the Buckeye Speed Bash speedrun marathon this weekend!

See the schedule for the event here: https://horaro.org/bsb2022/schedule

Watch the event at its twitch channel: https://www.twitch.tv/buckeyespeedbash

The link to the Google Drive folder which contains this randomizer unfortunately was rendered useless by an update Google executed a week ago or so.  I have updated this blog's links to the new format.  If you continue to have trouble reaching the page, or if you know of any other sites that need this new link, please let me know in the Discord server.

In other news, here's a preview of the tooltip feature I've been working on recently: 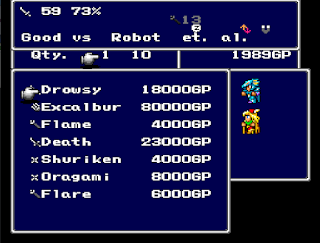 There has been a minor update to TLS.  The change list is below, mainly focusing on bug fixes.  One new feature, though, is that when randomized equipment is active, the game will now randomize the Avenger as well!

One thing I'd like to highlight is that if you randomize equipment permissions, TLS for some time now has been supposed to grant characters with the Karate and Ninja equipment styles a higher than normal likelihood of being ambidextrous.  However, that system wasn't actually working.  The fact that it now actually does will make those equipment sets a lot better than they were before, at least on average.

Also: the PC version might require existing installations of TLS to be removed before this version will be installed.
As always, get the latest version here:
https://drive.google.com/drive/folders/0B9k5jnZ_x-ijRG5BTE1objljbzQ?resourcekey=0-0RFE3TC3A3VnxLH4vaqIdA&usp=sharing

I've got a small update to the Lunarian Shuffle. Most of these changes are things I've been sitting on for a while now, intending to release them alongside the next major release, which will feature randomized dungeon layouts as well as an ancient cave style alternate game mode. Unfortunately, development on that feature has stalled out a bit, so I thought I'd get these changes finalized and into your hands.


As always, get it here:https://drive.google.com/drive/folders/0B9k5jnZ_x-ijRG5BTE1objljbzQ?resourcekey=0-0RFE3TC3A3VnxLH4vaqIdA&usp=sharing
Posted by Crow! at 4:18 PM No comments:

I've just released the newest TLS version.  The focus of this release is improving the randomized equipment feature, now that we know a bit more about its abilities and limitations.  I had to hack the game to make it more flexible than it was, but I think it was worth it!  Equipment should start giving the player more compelling choices even in the early game, while still progressing to better gear in the late game.

Also included are a couple hacks that are looking forward to the next big TLS feature: randomized dungeon layouts.  That will only come out once v1.140 is ready, and we are still about a month away from that, in my current estimate.  However, some groundwork is already being laid for code I'll need to make that work.

One final teaser before I just list the change log: once I finish randomized dungeon layouts, I intend to make an "Ancient Cave" style game mode where the player traverses through a long chain of random dungeons until they defeat a final boss!  The Lunarian Shuffle has always had a problem that it takes too long to complete in a single sitting, but a game mode like this could make a shorter, more streamer or racer friendly experience.

[EDIT: This post originally indicated the Windows version only was released; since then the Android build has been added as well!]

As always, get it here:
https://drive.google.com/drive/folders/0B9k5jnZ_x-ijRG5BTE1objljbzQ?resourcekey=0-0RFE3TC3A3VnxLH4vaqIdA&usp=sharing
Posted by Crow! at 7:04 PM 2 comments:

Another bugfix release is now out.  v1.132 resolves two issues that affected adult Rydias in non-rejoining character positions.  It also fixes a textbox mix-up between the Pale Dim and Plague rewards.

In other news, if you haven't already voted in this straw poll regarding possible new features for The Lunarian Shuffle going forward, please do!  Not everything can get in, and it's not a strict democracy (some features require a lot more work than others), but I value knowing which things people are more interested in me trying to get working.